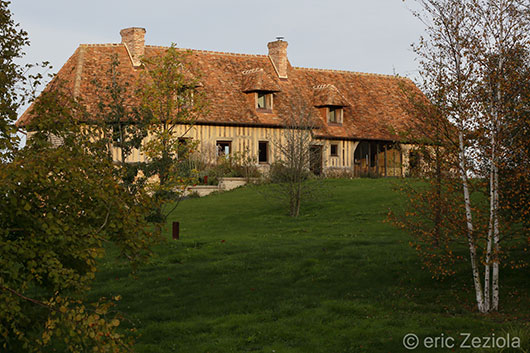 The Ambres distillery nestled in these valleys covered with orchards and punctuated by hedges and streams where the sea is never far away. This landscape is its story: that of a family of which the Pays d'Auge has become the cradle. That of a Calvados House born out of a woman’s fierce attachment to this land and her unwavering love of nature.That of demanding, graceful and melting blends, which summon the infinite aromatic richness of the apple.
FRANÇOISE
Translating the sincerity of nature
There are landscapes that immediately embrace you. In the 1950s, Françoise Primat and her husband made the Manoir des Ambres their resort. In her studio or in the open air, Françoise paints. She fixes the Pays d'Auge on the canvas: its changing skies, its meadows which fog or sunbathe, and of course its orchards which, over the seasons, reveal an infinite variety of greens. Admirer of Vermeer and Cézanne, she never ceases to translate "the sincerity of nature".
Deeply attached to this land, Françoise Primat will brew apples from her orchards for forty years, summon the still before aging her cider eaux-de-vie in the silence of the Manor cellars. If it thus fits naturally into the tradition of Calvados - an artisan product from the family community - it constitutes a treasure for future generations.
THE DISTILLERY
Preserving Norman architecture
Respect for Norman architecture: it is on this principle that the Ambres Distillery is restored by local artisans; The interior has been redesigned in a contemporary spirit, in order to meet the requirements of a 21st century Calvados House.
Thus, the half-timbered walls alternate between wooden frames and ocher cob, those of more recent buildings use sandstone or flint, while the roofs are covered with traditional flat terracotta tiles. And, because in every Norman courtyard, the garden and the vegetable patch are never far away, the flowers punctuate with lively touches these shades of off-white, ocher and red: the colors of the apple, in short.
THE ORCHARDS
Respect the land and the fruit
Since 2018, the 34 hectares of apple trees of the Ambres Distillery have been managed in organic farming. From Victot-Pontfol to Cambremer, from Notre-Dame d'Estrées to Saint-Pair du Mont, they are at the heart of the AOC Calvados Pays d'Auge area: clay-limestone slopes, where the and the humidity of the Norman climate favor the cultivation of the wide variety of cider apples authorized by the appellation.
Vast meadows - the grass protects the soil and biodiversity while providing a mattress to accommodate the apple that falls from the tree - provide the space for trees to grow. The Ambres Distillery favors the cultivation of apple trees with high stems, of great biological diversity.
THE CALVADOS
Emboss perfumes and aromas
The Ambres Distillery blends only from its own cider eaux-de-vie, distilled exclusively by itself. The oldest - which date from the Manoir des Ambres - dating back to the 1980s, it thus has the necessary amplitude to make Calvados that correspond to its vision: that of an authentic product, capable of restoring all the aromatic subtlety of the fruit. , its vigor and refinement, its roundness and intensity.
Leave the shadows for the light
Since 2021, the Ambres Distillery has been marketing its Calvados in small volumes, a range made up of AMBRE N ° 1, AMBRE X.O and AMBRE XIV, but also a very pretty Pommeau de Normandie.
Visit of the domain by appointment.